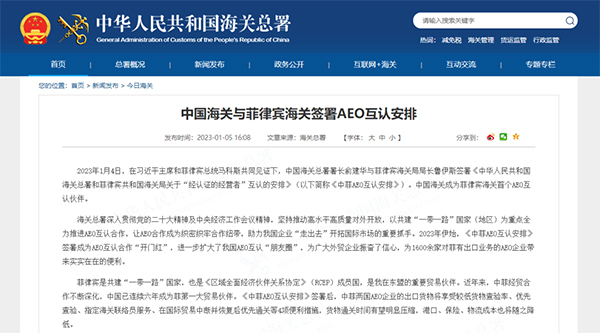 On January 4, 2023, the General Administration of Customs of the People’s Republic of China (GACC), represented by director-general Yu Jianhua, and the Bureau of Customs of the Philippines, represented by the commissioner Yogi Filemon Ruiz, concluded an “Authorized Economic Operator (AEO)” Mutual Recognition Arrangement (MRA), hereinafter referred to as Sino-Philippines AEO MRA, at the witness of President Xi Jinping and the Philippine President Ferdinand Romualdez Marcos, with which China Customs becomes the first AEO MRA partner of the Philippines Customs.

As an act to further implement the spirits of the Party’s 20th National Congress and the Central Economic Working Conference, GACC has insisted on high-level and high-quality opening and spared no effort to promote the AEO mutual recognition cooperation with focus on “Belt & Road” co-building countries (regions), so that AEO cooperation will be a well-knitted tie and an effective means for Chinese enterprises to “walk onto the stage” of the international market. The conclusion of “Sino-Philippines AEO MRA” At the beginning of 2023 symbolizes the first success of AEO mutual recognition cooperation and further enlarges our “circle of friends” in AEO mutual recognition. A large number of enterprises engaged in foreign trade would be inspired with enthusiasm and over 1,600 AEO enterprises involved in import and export businesses with the Philippines would benefit a lot.

The Philippines is a “Belt & Road” co-building country, a member country of Regional Comprehensive Economic Partnership (RCEP) and an important trade partner of China in Association of Southeast Asian Nations (ASEAN). In recent years, as a result of intensive efforts in economic and trade cooperation with the Philippines, China has become its largest trade partner for 6 years consecutively. Upon the conclusion of Sino-Philippines AEO MRA, 4 facilitating conditions are issued for exported cargos from AEO companies of the two countries, including low cargo inspection rate, priority in inspection, designated customs contact and priority in customs clearance once international trade is recovered after the interruption, which are expected to significantly shorten the customs clearance time and the costs of port, insurance and logistics consequently.

In the full name of Authorized Economic Operator, AEO is a system set up in response to the proposal of WCO to certify companies with good credit standing and high extent and level of legal compliance by customs in order to grant them with concessions.

Source: General Administration of Customs of the People’s Republic of China